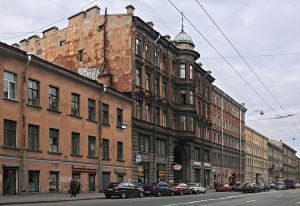 Russia has been existed since immemorial time, and this continent-spanning country holds a multitude of haunted places regarding the length of time the country was established. Some places have ever in their golden time, been a home of happy family, been a place for people jobs and been the nation’s pride until at a time, it is left and abandoned forever due to some reasons. Now, that abandoned places are the new places for another paranormal beings that are called as ghost or mystical spirit.

The local residents of the country, especially Russian elders are the one who still remember the stories which related to the ghost spirits etc. They are the ones who can give advice, suggestion and warning us in order not to visit certain places because of how terribly spooky the places are. Below are the lists of the haunted places in Russia that locals suggested not to visit:

Sokol station belong to one of Moscow subway stations which often associated as haunted place. It was actually because of the existence of the negative energy from ancient cemetery nearby. The story told by local Muscovites was back then in the World War I, the soldiers who become victim of war is buried next to the recent Metro station.  But after long times which have passed, the creepy atmosphere and the negative energy are still remains until now.

Then In 1918, mass executions of White officers and priests by the Reds were also held there. All this historical background led to the appearance of ghosts in the dark tunnels of the station. For example, frightening stories told by the subway passengers who accidentally bumped into the other world inhabitants come from the old times such as : the Muscovites of the fifties of the XX century, soldiers of the Civil War and the Great Patriotic War and even horseback riders.

This house was formerly a beautiful peace house owned by the couples of rich Russian Muscovites. They were Pyotr Kusovnikov and his wife Sofya Kusovnikov. In their life, they were been so greedy on their wealth and are even do some odd things to keep their money in the different places of their house, even in unusual place which can not be expected for normal people’s thinking.

But one day, at one unfortunate night, they move their money into the fireplace, when the janitor came and accidentally burned all of the money. The wife of Sofya died because of heart attack after she found out about the accident. And the husband passed away because of unknown reason a little later.  Since then, the ghost of a hunched old man in a coat who grieving his lost money has routinely appeared on the street near the house.  It was Pyotr Kusovnikov ghost after all. It is not suggested for you to visit this place, even locals prohibit to do so.

Znamenskaya Tower is one of the two towers left from the glory of 16th century. Built around 1658 or 1659, this tower which is located in Yaroslavl is formerly become iconic historical centre in the city.  Until a bloody accident happened, it was during the Russian Civil War between 1917-1922, a group of White troops held positions in the Volkovsky theater in Yaroslavl. The Red commissar in command of the siege promised to spare their lives. However, he lied and all the Whites army were executed at the Znamenskaya Tower. Since that time, the ghost of the commissar who didn’t keep his promise has been seen at the place of his crime.

It is one of the most mysterious buildings in St. Petersburg. Besides well known as the only St. Petersburg castle, this also the home of Tsar Paul I. The castle built in 1797-1800 dedicated for the famous Tsar. This place has dramatic historical rather mysterious story behind it, where the emperor was killed by conspirators on 1801, not long after he moved into the newly built castle. Since then, a legend said that the spirit of the Tsar often appeared in the corridors with holding candle on his hand and some also said that the ghost can be seen in particular window playing his favourite instrument- violin-.

This place is located in the village of Lyakhovo, Nizhny Novgorod, exactly next to the modern psychiatric hospital. Locals said that that there is a tragic accident ever happened there, in the old abandoned building, when a young girl decided to murder herself by hanging on the roof of building. The reason why she ended her own life was about unrequited love. Since then, locals often saw a white silhouette with her moaning of love. And they called the ghost as “love-stricken schoolgirl”.

6. House of Rasputin in St. Petersburg

This place nowadays is actually the common residential apartment, but there is a haunted story behind it. It was back then in the early 20th century, when the second floor flat was a hoe of the most mystical figures in Russian history, he was Grigory Rasputin. His ghost spirit sometimes appears here and frightening its flat residents with its freaky steps and grunting in dark corners of the flat. Locals are afraid of it in the old time, but since now the place which is located in at 64 Gorokhovaya Street in St. Petersburg is becoming full of residents. The people starts forgetting the story, and it is now remain as just a story.

The lists of haunted places above are better not to visit, since locals have suggested not to do so. But back to your guts, if you have brave mental and like to discover haunted places, than these article would help you.