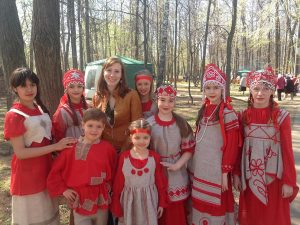 Children’s Day is celebrated June 1st all around the country and Russia was the first country to keep pace with the WIDF (Women International Democratic Federation)’s resolution on International Children’s Day. As June 1st is approaching each year, Russian children perform indigenous dances to enjoy various festivals and other celebration activities that their schools organize for them. The celebration emphasizes on the importance of showing love, attention, and affection to children, because the children of today will make the Russia of tomorrow. So, the way parents bring them up will determine the fate of the country.

(Also read: 8 Recommended Places For Your Children to Play in Russia)

On Children’s Day, there will be schools and colleges hosting cultural programs, functions, and events to celebrate children all around the country. At times, teachers will also participate in those functions in order to show their love, support, and affection for children. In this article, we will learn more about 6 fun facts of Russian Children’s Day. So, keep on reading.

In some cities of Russia, there is milk festival every June 1st which in it, there are various other sub-events such as flash mobs, theatre performances, concerts, and ice-cream festivals. Ice cream will be given to children in Kaliningrad, Syktyvkar, and Sochi free of charge that day. Domestic dairy products will play a role as a special treat at the milk festival in Veliky Novgorod. There are free lunches and snacks prepared for children from large families and orphanages, too.

As the name suggested, the participants of toddle baby championship are those of age from seven months to one and a half years old. Prior to the championship, the potential participants will need to overcome distance suitable for their age group.

(Also read: Activities That Russian Children Do During Holiday)

3. A Lot of Charities

Even though Children’s Day is a day to celebrate children, there are cities in Russia that do not forget the fact that it is also about bringing awareness to adults about children around the world who are struggling with their basic human rights, lack of access to education, and terrible living conditions. That is why many charity events took place across the country to accumulate money for those children in Russia who need help.

The Russian children’s fund is dedicated for over 10,000 children in Russia, primarily socially vulnerable children with poor parents, orphans, disabled children, and alike. They are expected to attend the charity and celebrate the holiday together. The charity is sometimes wrapped in the form of concert which will show the best Russian children’s spectacles for young audience. The charitable concert becomes the highlight of the holiday.

Also, some other offices of the fund will stage similar events in their respective regions, presenting theatrical performances and gifts to more than 100,000 Russian children. Young guests of the event will attend the concert and other sub-events such as quizzes, master classes for decorative crafts and a fair. Along with those events, there is a real size model of a cannon made of ice that will ‘shoot’ with ice cream. The executor clothed in the fashion of the nineteenth century will treat children with sweet delicacy.

Pavel Astakhov, Russian children’s rights commissioner, encourage all the celebration regarding Children’s Day in the hope that each Russian child could earn a worthy life, perfect health, a strong and friendly family, and also attentive and careful adults next to them during the celebration. According to Astakhov, the holiday celebration’s main purpose should be able to shape a childhood protection system in Russia, unite the state authorities and the society in the process, and draw attention and forces of all children and their parents.

The Russian Children’s Day also carries another important task to expose the problems of the cultivation of a pleasing image of a foster family with a lot of children through the mass media or advertising and the issue of underage orphans, shape in the public mind the crucial information for adoption of children.

5. One of Long-Standing Traditions

It is interesting to know that the tradition to mark Children’s Day was originated in their own country in the post-war years when there were many reasons to worry about the lives of children. The International Children’s Day was first observed in 1949 by the council of the Women’s International Democratic Federation at its session in Moscow. The holiday was celebrated on June 1st, 1950 in 51 countries for the very first time. It became one of the most joyful holidays for children in Russia and one of most effective ways to warn adults about the need for ongoing care about them. It has become a symbol of mobilizing public opinion on the desire to protect children from war, for the protection of their health, upbringing, and education.

The major stimulator of the proposal of Children’s Day celebration was the Second World War that killed many children’s lives, and even more kids left without supervision. Back in 1949, the problem was discussed at the session of the International Democratic Federation of Women. As a result, in many years to come, the holiday has been widely celebrated.

Russian president will award the Order “Parent Glory” to parents of large families such as parents and adoptive parents who are raising eight or more children and set an example to the institution of family. Russian president will also attend the festival named “From Sports to the Olympic Family Victory” in Sochi, which promotes sports, a healthy lifestyle, and love of exercise to families.

So, those are 6 fun facts of Russian Children’s Day that is celebrated on June 1st. If you are about to celebrate Children’s Day in Russia, make sure you have gifts such as clothes, toys, and books to distribute to orphan children, since it is considered as common practice to do on that day.