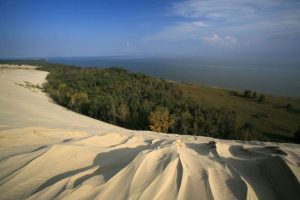 The beauty of nature bestowed by God on humans is indeed spread throughout the world. Natural beauty is usually very beneficial to the country in various aspects. Like economic aspects and prestige in the eyes of the world. Again and again, Russia has a unique nature that has become a UNESCO world heritage. namely the Curonian Spit.

The Curonian Spit is a 98 km long, thin and curved spit that separates the Kuranian Lagoon from the southern Baltic Sea coast located in Kaliningrad Oblast, Russia and the north-west part of Lithuania. Russia has 46 km of this area and Lithuania has 52 km. This is a UNESCO world heritage site owned by both countries.

Maybe you think what’s beautiful about sand deposits? If there is no interesting thing, UNESCO would’t make it as a World Heritage. Therefore, we have provided 7 Breathtaking Facts of the Curonian Spit in Kaliningrad Oblast, Russia which makes you want to fly to the Curonian Spit immediately.

1. The Second Longest Spit in the World

The Curonian Spit is the second longest spit in the world after Arabat Spit. The length of The Curonian Spit starts from the Sambian Peninsula in the southern border with Lithuania about 40 km north, the width varies, ranging from 0.4 to 4 km.

2. Rich in Species of Flora and Fauna

Birds and waterfowl are abundant because this place has abundant wetlands and areas on the main fauna migration route. 262 bird species have been recorded in this place. And 100 are known to nest and breed in the region. About 10 to 20 million birds fly over the Spit region during spring and autumn migrations. The area is also home to 46 mammal species, including deer, European forest deer, wild boar, fox, marten, raccoon dogs, ferrets, rabbits, red squirrels, and beavers. The Curonian Spit has recorded more than 290 species of terrestrial vertebrates, representing 80% of the species found in the Kaliningrad Oblast, Russia. Flora life also varies in this region. 889 species, hybrids, varieties, and forms of wild vascular plants, 398 genus and 111 families.

The Curonian Spit is thought to have formed around 15,000 BC when the glacier receded leaving the Baltic Sea behind, and the Curonian dunes were built on glacial moraine. Glacial moraine is formed by the forward front of an icy river made during the end of the ice age century. After the ebb and flow of glaciers, the power of the sea and wind formed large hills, which on average had a height of 35 meters above the Spit. And there are 60 meters.

This area has high biodiversity because of the many different ecological communities in close proximity to each other. That is a combination of beach, dunes, wetlands, grasslands, and forests.

4. The Legend of the Diverse Society Regarding the Curonian Spit

The first is according to Baltic Mythology. According to this mythology, the Curonian Spit is formed by a Neringa Giant who plays on the beach. This giant child also appears in other myths. In Greek myths this giant is considered a strong young woman.

The second is the mythology of the Teutonic Knights. This mythology considers the Theutonic Knights occupied the area in the 13th century, built their palaces in Memei, Neuhausen, and in Rositten. The spit is considered the last home of people who lived in old Prussian times that are now extinct. Old Prussian is an extinct Baltic language spoken by old Prussians.

This mythology has become its own history for the people of Russia and Lithuania who believe it until now.

Kursenieki is an almost extinct Baltic ethnic group that lives along the Curonian Spit. Their settlements stretched from Memei to Danzig. Kursenieki is considered a Latvian who gained independence from the Russian empire.

In addition to Putorana Plateau, Virgin Komi Forests, and Lena Pillars, The Curonian Spit was also included in the UNESCO list of world heritage in 2002 based on V cultural criteria, namely extraordinary examples of traditional human settlements, land use, or sea use that represent a culture, or human interaction with the environment, especially when it becomes vulnerable under the influence of changes that cannot be changed.

Currently, there are a number of homes on the Curonian Spit. These are the people who have given permission to corrupt local government officials. The Shit is a United Nations World Heritage Site and only structures that are allowed outside official settlements were fishing shacks.

The Curonian Spit is not only famous for its natural beauty, but also the cultural history of the people since millions of years ago existed in this place. This place is the history of human civilization in two direct countries. Namely Lithuania and Russia. Of course, UNESCO is very appropriate if making this region as a world heritage, so that history and beauty can be felt by everyone. The Curonian Spit must be maintained from irresponsible human hands. Sometimes, there are some places that are damaged because they have been touched by human hands. Especially if the Curonian Spit has a beach containing mining goods. It could be that exploration of mining goods is damaging and polluting the curonian spit. But the government must always have an effective program to protect the pride of the country.

That is the 7th Breathtaking Facts of the Curonian Spit in Kaliningrad Oblast, Russia that we have presented. And for those of you who are very interested in exploring Russia’s natural beauty, don’t miss to visit this beautiful and historic area.