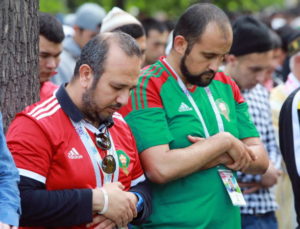 Islam in Russia has begun to develop into the second largest religion after orthodox Christianity in Russia. One of the cities in Russia that has the most Islam religion is st. petersburg. In this city there is a famous mosque called Saint Petersburg Mosque. Fasting time in this city has the longest time around 22 hours, so the time to break the fast until dawn only leaves about 2 or 3 hours per day.

In Peter’s case it has two fasting time zones which is fasting which is still on the essence of fasting that is from dawn to sunset (from sunrise to sunset) which is about 22 hours and the zone time special for north pole region most of Muslim cleric declare can zone arab time (shorter from real time zone or less than 22 hours). This is related to health problems.

In addition in this city has a celebration in the typical ramadahan month. This article will cover about 6 Celebration of Ramadan in St.Petersburg, Russia. You can read various reasons why you should visit St. Petersburg.

St. Petersburg, Russia, a beautiful city full of history with a distance of approximately 600 kilometers from the city of Moscow. The city is also the birthplace of the Russian president, Vladimir putin. In addition, this city also used to be the capital of the country before moving in Moscow as it is today. Muslims here are very tolerant of all ethnicity and religion. In the holy month for Muslims, Ramadhan month has a variety of celebrations that do not disturb other religious people. Here are 6 Celebration of Ramadan in St.Petersburg, Russia, as below.

1. There is an impromptu bazaar

Not all cities in Russia hold an impromptu bazaar. One of the cities in Russia that always held an impromptu bazaar during the month of Ramadan is st. petersburgh. Impromptu bazaar in this city majority sells Muslim sundries such as Islam book, perfume, prayer and others. In addition, the bazaar also provides food and drinks to break the fast. Usually bazaar in st. This peterburg was held in the complex of the Russian peterburgh mosque. Therefore, with the impromptu bazaar organized it can help the citizens or Russians who live in st. petersburg. This event is expected of residents or people who live in st. peterburg becomes more devoted and faithful.

In addition there is an impromptu bazaar, the city where President Putin’s birth in every month of Ramadan there must be a tent around the mosque area. Tent is known as a ramadan tent. These tents are used by Russian people to wait for the Maghrib adhan. You may also want to check History of Muslim culture.

As mentioned earlier, in petersburg there is a ramadan tent to wait for the time to make a buzz. In waiting for various activities around the area of tents ramadan, one of which is the festival reading Al – Qur’an. The festival is organized for children. In addition to reading festivals of the Qur’an, there are also Quran reader festivals or memorizing verses of Al-Qur’an. All religious activities are also often presented in this ramadan tent. This is because to be able to improve faith and devotion to Allah SWT.

4. Breaking the fast together

As in other cities in Russia, the celebration of Ramadan month in Petersburg is also open together with the community. Open fasting is usually held in the mosques – mosques in the city st. Petersburg, Russia. In addition, this fasting is also expected to maintain tolerance between religious communities, although different religions but a community (such as colleagues or colleagues). Open together in this mosque can be a symbol of virtue in fasting that makes us the same in the eyes of human and Allah SWT seen in the simplicity of fasting meals together in the mosque.

5. Go to the doctor before fasting in Ramadan

One of the differentiators of the celebrations in the city St. Peterburg with other cities in Russia i.e citizens or Russians living in this city perform self-examination before the first fasting month of Ramadan. This tradition shows the importance of good physical condition and fit in performing the fasting month of Ramadan. Because with a good physical and strong will be able to run fast and sincere fasting. Although the function of fasting aims to nourish the body, but the geographical conditions of extreme temperatures in st. peterburg will make the body of the fasting person experience change. Therefore, self-examination as early as possible before running the fasting month of Ramadan is the main tradition in the city of St. Petersburg.

6. Break with Russian food and drink

Although the celebration is the same as other cities in Russia. But the celebration in Ramadan is still preserved by citizens or Russians who live in the city of st. petersburg. This celebration is breaking with food and drink typical of Russia. Russian specialties such as khingalsh. Eat this form of bread made of flour filled with pumpkin or cheese. While galnash. such as khingaish but containing wheat. For a typical Russian drink such as kvass, a traditional non-alcoholic Russian beverage produced from a fermentation process mixed with fruit flavor.

Thus a brief explanation of the 6 Celebration of Ramadan in St.Petersburg, Russia. For those of you who are going to holiday in Russia you should take a holiday at the time of Ramadan because you can see the various celebrations in the month of Ramadan as explained in the explanation. You will experience different sensations of fasting in Russia.You can read halal restaurant in Moscow., most popular foods in Petersburg during ramadan. and  most popular foods in Moscow during ramadan fasting.