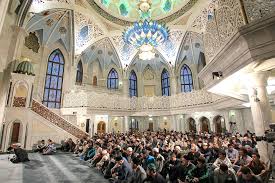 Each country must have its own way in welcoming the coming of the holy month for Muslims. Russia is the largest Muslim country in continental Europe. Islam in Russia is the second largest religion after orthodox Christianity. The number of Russian citizens who have embraced Islamic religion in Russia is about 21 – 28 million people or 15-20 percent of about 142 million people. Not a small number of Muslims in the country of the red bear.

Therefore in Ramadan has a tradition or a typical event in various cities in Russia. This tradition is nothing but intended to get closer to Allah SWT. This tradition is also not separated from the existing culture in Russia but still do not violate the command and prohibition of Allah SWT and sunnah Prophet Muhammad SAW. This article will cover about 5 Celebration of Ramadan in Moscow, Russia.

1. There is a Tent of Ramadan

One that distinguishes Ramadan and other moons is a ramadan tent around a mosque in Moscow, Russia. This tent serves as a gathering place of Russian people waiting to break their fast. In this tent will be held to break the fast together after the call to prayer islamic sunset. In addition to breaking the fast together, also held various festivals such as reading festivals of the Qur’an and memorizing verses of the Qur’an. This year, according to an NGO survey in Russia shows that every day, there are more than 600 people from different nationalities, all of whom are breaking fast in this tent. In this ramadan tent, people can try traditional russian dishes without having to see their religion. This is because tents ramadan is not only for Muslims in Russia and even non-Muslims can enjoy the food that has been provided in this ramadan tent. Other than that,. Children can also participate in the Qur’an reading competition. See also Most Popular Drinks in St.Petersburg During Ramadan

In this ramadan tent, in addition to selling food, every day in Ramadan there are cultural performances of ex-Soviet Islamic countries and Muslim regions in Russia. The event is an attraction for visitors to be willing to visit tents ramadan. Visitors in this ramadan tent are not only treated to food, but also cultural enlightenment with the existence of tauziah with various themes. In addition, visitors can watch documentaries, listen to national music and songs sung by artists from countries around Russia.

2. There is a festival reading Al – Qur’an

The Qur’an reading festival is held around the ramadan tent and is only for children. This event is intended to develop children to be memorizers of Al-Qur’an not just reading Al-Quran. This is because the pickle is not just reading the Qur’an but there is also a memorizing competition verses of the Qur’an. However, the main purpose of this festival is to grow love for the Qur’an so that children not only read but understand and can even practice in everyday life. Although the event is held only once a year but this event is much in demand by Russian mothers for their children to attend this festival. The event is open to the public without exception either russian or non russian. You should also know what the popular food during Ramadan in St. Petersburg.

3. There is a fasting break

As in the Muslim countries of Asia including Indonesia, in every month of Ramadan there must be an iftar event together. In Russia, this situation has been described before, in ramadan tent also held breaking fast together. This situation is believed to be able to raise awareness towards others even if the person is non-Muslim. Breaking the fast together in this tent is held every day in ramadan month. Everyone can contribute in the form of food, drink or in the form of money to the mosque administrator in the city of Moscow so that later can be used as a shadow in the event of breaking fasting in the ramadan tents.

4. Sunset islamic prayer at the restaurant

One differentiator of Ramadan month with the other is sunset islmic prayer. If in ordinary months, many Muslim russians perform prayers in the mosque but this condition is different when in the month of Ramadan when the time is sunset islamic prayer then many Russian muslim run prayer in the restaurant. This condition is caused by the breaking time of russian Muslims in the restaurant so that many russian Muslims who run the sunset islamic prayer in the restaurant as well. This situation lasted for years even though the ramadan tents had been present in many cities in Russia other than in the state capital, Moscow.

5. Eid prayers on the streets

After Ramadan is over, it is time for the Muslims in the world including in Russia who welcomed the arrival of a fitri or holy day that is Eid fitri. This hair is the culmination of the month of Ramadan because after so long fasting Muslims time to become a holy people. This holy day is marked with prayers of Eid al-Fitr together. Despite the number of mosques in the city of Moscow, Russia is a lot but when Eid prayers are often frequent quota excess so many pilgrims who run Eid prayers in the streets outside the mosque complex. This condition is indeed visible when Eid fitri in Moscow, Russia. But it does not make Muslim russia fear and reluctant to worship Eid prayer from year to year. You must read this article acts about celebrate eid al fitr in russia.

Thus a brief but profound explanation of the 5 celebration of Ramadan in Moscow, Russia. For those of you who are curious about the celebration of russian Muslims then you should visit Russia. If you are not able to speak Russian then you should first learn Russian language for you to easily communicate with Russian citizens during a visit to Russia.