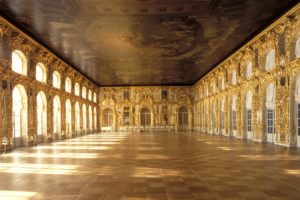 If you want to get to know of the architecture of Catherine Palace, this article suits you well. Catherine Palace has been a part of Russian beauty for many years. Most people know of its beauty and luxury. The name “Catherine” took after the name of the first empress of Russia, Catherine I. She was Peter the Great’s wife. Moreover, the palace is also known as Tsarskoye Selo or the Tsar’s Village.

Catherine palace is located in Pushkin, near St. Petersburg. It has 740 meters (2427 feet) length which is massive. Like most St. Petersburg structures, color of Catherine palace is predominately with bright colors. Colors of robin’s egg blue, white and gold blend in harmony. It creates the impression of luxury as well as beauty. Moreover, more than 200 pounds of gold decorates the palace. Carvings on the wall also add to its extravagant and artistry.

Peter the Great presented the palace to his beloved wife. The palace functioned as imperial family’ residence in summer. After her parents dead, Empress Elizabeth took over the throne. During her reign, area of the palace increased enormously. In the mid 1700’s, Catherine II asked architect Bartolomeo Francesco Rastrelli to renovate the palace. Thus, the architect presented the new 325-meter long palace in a flamboyant Rococo style. Furthermore, she asked Rastrelli to change the interior design into a neo-classical style.

From outside, people can clearly see Catherine Palace chapel. There are five domes on top of the chapel. One big dome is in the middle while the other four are small domes surrounding it in square form. Those domes have golden color. There is cross-shape on top of each dome. Previously, those golden color is real gold of more than 200 pounds. But today, golden color that people see is just gold paint.

Catherine palace has a very long hallway. Most people will be amazed just by seeing it. It provides an interesting view to the visitor. With some luxurious interiors alongside it, people will easily fall in love with it. There are so many doors along the hallway. Every door has the same distance from the exterior walls. With all the doors open, visitors can see hundreds feet of the hallway which passes through many rooms. Several frames of doors are painted in gold color while several other have elegant design. The interior of Catherine Palace provides so many mirrors and windows. Thus, the light from outside makes the view even more impressive.

If you want to get to know of the architecture of Catherine Palace, this place may satisfy one of your curiosities. The centerpiece is the Great Hall (also known as the Grand Ballroom). Rastrelli constructed the place where the imperial family held such grand even as ball. It has almost 56 feet wide and over 154 feet long. The Grand Ballroom is on the second floor of Catherine Palace. Besides, it occupies the entire width of the imperial palace.

There are so many two tiers of glass windows on each side. Those windows maximize the light from outside to enter the ballroom. Thus, they make the ballroom looks bright and grander. Meanwhile, there is painting on the ceiling. Numerous carvings also cover each side of the wall. They make it even more like a piece of art.

Amber room is probably the most well-known of all rooms in Catherine Palace. The room was used as a study. After Peter the Great admired inlaid amber panels in King Frederick William of Prussia’s palace, he gives them to Peter. The 16-foot jigsaw-looking panels contains over 100,000 perfectly fitted pieces of amber.

During the World War II, the Nazis took apart the amber panels. They then shipped them from Russia to Germany. After the war ended, no one could find the panels. However, many Russians believe that those panels still exist somewhere in Germany. As the panels are part of the room, Russian artists recreated the panels. Using 1980’s technique, they finished the work. Now, public can view  recreation of the panel.

If you want to learn more histories surrounding Russia, check out Bread Riots in Russia, History of Christmas and History of Russian language.

Empress Catherine II did not like the design used in Catherine Palace near St. Petersburg. She preferred classical style than Baroque one. Thus, she asked Scottish architect Charles Cameron to redesign interiors of the palace. He also designed the bedroom of Maria Feyodorovna. She was the Grand Duke Pavel Petrovich’s wife. In this room, Cameron recreated Pompeiian murals in three-dimensional forms. The recreation creates a Roman feel.

If you imagine a room which looks like a green house, you will be disappointed. They choose the word “green” as the wall in the room is predominately with green color. Moreover, cravings in a Roman feel cover the green wall. Judging from the style, Cameron was obviously the one who designed the room.

Hermitage Pavilion lays near Catherine Palace. It is one of two garden pavilions of the palace. Rastrelli designed the pavilion as a place of or entertainment for members of the royal family.

Those are 8 iconic views of Catherine palace that you may want to know. Does the information urge you to visit the place?